Cardless ATMs May Be More Secure And Convenient 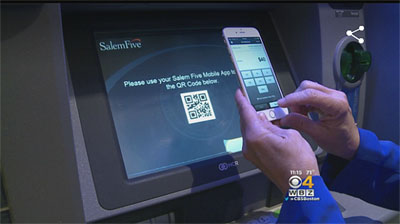 BOSTON (CBS) – Imagine getting money from the ATM and not having to hunt around for a debit card.

Cardless ATM’s are a new type of technology that is starting to show up at area banks.

Analysts believe they are not only more convenient, but can also help keep your money safer.

Dawn Dillon, a senior vice president at the Salem 5, demonstrated how easy it is to use. She entered her transaction on a smart phone. Then she held the phone up to the ATM screen after being presented with a QR code.

About nine seconds later Dillon had cash in hand.

“It works pretty quickly. It’s a lot faster than inserting a card. It adds a lot of convenience. It certainly adds a layer of security,” she told WBZ-TV.

“It’s tenfold above what we saw with online banking,” she said.

Industry analysts believe it might get more young customers to use traditional banks.

This system is less susceptible to fraud because the customer’s information isn’t available to a criminal thru the magnetic strip on the back of a traditional card.

There have been cases of ATM skimming in Falmouth and Goffstown, New Hampshire in recent weeks.

Skimming is when a fake card reader is installed over a legitimate ATM system to steal the customer’s personal information. A criminal will then position a pinhole camera to get video as a password is entered on a keypad.

The ATM on the left has the skimming device, while the ATM on the right does not. (Photos from Taunton Police)

O’Connor said a criminal usually leaves this apparatus in place for anywhere from 24 hours to a couple of days.

“It’s quick money once they have that information. It’s a quick turnaround. All they have to do is dump that information off the devices, create a counterfeit card, and go to an ATM and start making withdrawals,” explained O’Connor.

Banks are trying to stay one step ahead. Some are also experimenting with biometrics to authenticate accounts.

“You always worry about people stealing your PIN, your information, credit cards, all that stuff,” she said.